Altair 8800 computer was equipped with serial board called 88-SIO, or 88-2 SIO. It was a device which allowed connecting other devices using RS-232 interface. From one side it was attached to CPU on at least two ports (most commonly 0x10 and 0x11). The other side was ended with one or two physical ports (allowing to connect one or two devices). Real board supported both hardware and software interrupts. 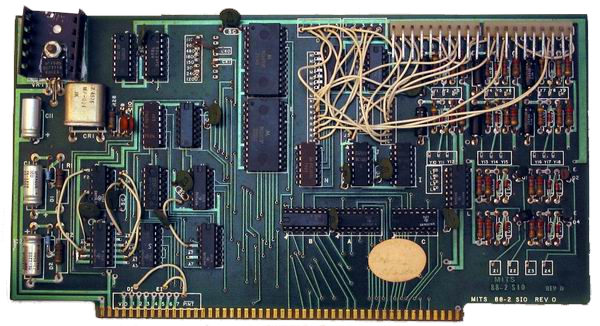 Original manual of MITS 88-SIO serial board can be downloaded at this link.

The plugin emulates only basic functionality of the board. It has the following features:

Interrupts are not supported yet.

GUI can be seen here:

MITS 88-SIO board is attached to CPU using multiple ports. By default, the used CPU ports are:

The reason why there are multiple “bindings” is that there existed various software which expected specific bindings. The presented default values are the most common ones.

These numbers can be changed in the Settings window:

MITS 88-SIO board as emuStudio plugin is a device which does nothing really useful. It just listens (and understands) commands coming from CPU through the I/O ports. The command is either a request for reading or request for writing to the attached device.

Theoretically any device which supports the basic I/O (reading/writing), can be attached to the board. More about plugin internals can be found in programmer’s manual of emuStudio, which is not part of the user documentation.

In current implementation of Altair 8800 emulator, the only suitable device which can be attached to the board is terminal ADM-3A from Lear Siegler, Inc and which is described in the particular section.

The following table shows all the possible settings of MITS 88-SIO plugin:

As can be seen; the X represents a number, it’s a way how two SIO ports can be attached to multiple CPU ports.

In order to show something useful, let’s assume that a terminal LSI ADM-3A is attached to the board. Remember, the board only mediates the communication, it does not interpret any of the sent/received characters.

Whole communication between the board (and attached device) and CPU is controlled by programming the two ports: Status port and Data port. The following table shows the ports and how they are used.

Now, detailed description of the ports follow. Bits are ordered in a byte as follows:

Controls input/output interrupts enable. If both interrupts are set to be enabled, it only empties transmitter buffer in the device, which was a post-step after interrupts being enabled. However, the plugin does not implement interrupts support.

Read status of the device.

Write data to the attached device.

Read data from the attached device.

If the attached device sends asynchronously multiple data, the emulated board stores all in a buffer (queue) with unlimited capacity, so no data should be lost and can be read anytime.

In this section it will be shown a small “How to” program terminal using 88-SIO ports.

Print a character on screen

In emuStudio, it is enough to write data to Port 2, e.g.:

Print a string on screen

For writing strings, it is more practical to have a procedure.

For reading a character, it is required to read the Port 1 until the character is not ready. Then we can read it from Port 2.

Now follows an example, which will read a whole line of characters into memory starting at address in DE pair. The procedure will interpret some control keys, like: backspace and ENTER keys.