The program which is going to be executed is read from the operating memory, so the CPU must be connected with memory (brainduck-mem) to work properly.

Also, optionally (but commonly) it is should be connected with I/O device (brainduck-terminal), so input/output can be received/send from/to the device. Only one device can be used.

The CPU provides a basic user interface in the form of the status panel, which is visible in the emulator panel in the main window.

Breakpoints are supported, so as “jump” to a specific location (which might be dangerous to use).

In the following image, you can see the status panel of brainduck-cpu. 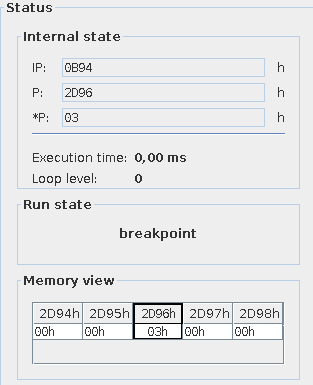 It is split into three parts. Within the ‘Internal status’ part, there is shown content of registers IP and P. Register IP does not have a counterpart in brainfuck. IP stands for “instruction pointer”. The content is pointing at the next instruction being executed. Register P is commonly known from brainfuck. It is a pointer to data.

There is the measured execution time, which is reset when the user starts the program and stopped when either the program stops or the user stops it.

Loop level shows the depth level of brainfuck loop the program is in. For example, if instruction pointer points into the middle of the program [[-]], to the - instruction, the loop level is 2.

It is very important to reset the CPU after each source code compilation. The reason is that after compilation register P is not changed. It therefore might point somewhere into compiled code in the memory. If the program was executed, changes in data would corrupt the program itself.

Resetting CPU would move the P register after the first occurrence of a memory cell with value 0. The value 0 in BrainDuck CPU represents halt instruction, which corresponds to EOF in brainfuck.