Computer schema represents a real configuration of the emulated computer. They are “drawn” in a computer schema editor. Users pick plugins that appear as “boxes” or elements on the screen. Then using connection lines those elements can be connected together to express a relation (that they can “see” each other). 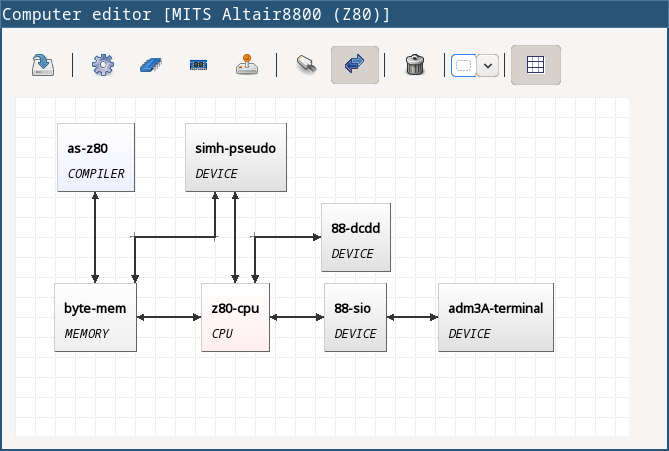 Description of the control panel follows.

Virtual computers in emuStudio are following the von-Neumann model of computers. It means that each computer must have a CPU and memory. Optionally one or more devices, and optionally a compiler.

In the previous image, a CPU “sees” the memory, but not vice-versa. It means, CPU can read/write from/to memory, but memory is not seeing it, it can just answer to CPU requests. This connection makes sense in real-world computers.

Then a grey temporary line is being drawn having its end at the mouse position and moving with the mouse move. If the element is not really close, the user can make a “path” by clicking somewhere in the schema. At those locations, fixed-points are created.

When a user clicks at the second element, the temporary line disappears, and a real connection line is created.

The user can find the fixed-points later and move them by dragging. They can be removed by clicking at them with the right mouse button.